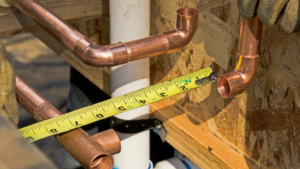 According to the Safe Drinking Water Act (SDWA) of 1974, homes and commercial buildings have the right to access safe drinking water in the US. This law, enacted by the Environmental Protection Agency, also provides standards for all public water systems. Policies are requiring municipal suppliers to eliminate bacteria and hazardous contaminants within water pipes across the country. They are mandated to treat any of the elements that can be harmful to people’s health. Public water systems and private sectors should be able to perform disinfectant methods regularly. As a result, numerous water suppliers resorted to a chemical called chloramine.

Although chloramine is not hazardous to health, this disinfectant can extremely corrosive to copper pipes.

Streamlined access to safe and clean drinking water is essential to our health. However, aging water systems can lead to copper pipe corrosion, damaging your pipes and contaminating your water. When copper pipes corrode and get damaged, it can result in bacterial growth and attract harmful chemicals such as lead, zinc, and copper.

Chloramine is a disinfectant formed through a mixture of ammonia and chlorine. When combined with ammonia, the chlorine will remain for an extended period. Otherwise, chlorine dissipates soon after it combines with water and gets exposed to air. Extending the lifetime of chlorine is paramount for a majority of public water systems to keep drinking water safe against contaminants.

Despite increasing the quality of drinking water, chloramine can be extremely harmful to copper pipes. Chloramine is a significant contributor to copper pipe corrosion, pitting, and leaks. When this happens, property owners often have no choice but to opt for commercial copper pipe repair. It is a common occurrence that a corroded pipe goes undetected for several months which can result in water damage or worse, harmful mold and mildew growth. Even worse, it can go as far as to the point your pipes suddenly burst or corrode past the point of repair, leading to a costly replacement and water remediation.

One way to resolve copper pipe corrosion is through epoxy pipelining. This lining creates a barrier that prevents water from contact with the interior wall of the copper pipe. The epoxy resin is spread through the pipe, coating its interior diameter to create a permanent inert barrier between the water and the wall of the pipe.

Overall, epoxy pipe repairs can last for decades, usually depending on the temperature of the water inside a pipe, with the life span being longer the cooler the water temperature. On average, epoxy resin coating can last between 35 and 50 years. It can prevent external elements like tree roots and shrubs from penetrating the pipe systems. It also serves as a barrier against pitting, damages, and potential clogging.

As previously mentioned, the epoxy coating can effectively seal the inside of pipes and is an ideal treatment to prevent pinhole leaks. Many commercial and industrial property owners prefer epoxy repair to pipe replacement as it can be significantly cheaper and in some cases out-perform new pipes. Instead of replacing your pipes, you can still take advantage of your old plumbing systems. This method is less invasive and disruptive to your daily activities.

Epoxy coating is simple, but it is crucial to hire a company like Curaflo specializing in epoxy pipe repair. They deploy professionals who are qualified to perform the application. Once they are on-site, they will assess your plumbing system before carrying out the work.

If you wonder whether epoxy pipe lining is safe for water consumption, the short answer is yes! Epoxy resin is a food-grade material that is also in drinking cans. It is also cheaper to have your pipes coated instead of replacing them altogether, merely due to a couple of leaks.

Experts revealed that contamination is almost nonexistent to pipes coated with epoxy resins. In case a minuscule amount of leaching occurs, it is safe for human health. There are no negative health concerns associated with epoxy pipelining. In fact, the CDC articulated that epoxy resin has no carcinogenic or mutagenic properties.