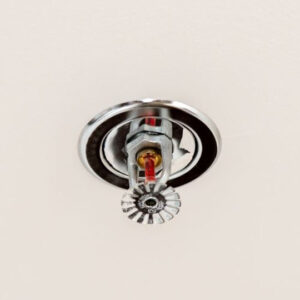 We all see examples of corrosion, mainly in the form of rust, around us every day. It can be seen on metal surfaces such as on bridges or highways, or in cars, parking structures, and buildings.

Corrosion can generally be described as the process by which materials are gradually destroyed or uniformly weakened by electrochemical interactions. Defined in the Fire Protection Handbook, MIC or Microbiologically Influenced Corrosion is a type of corrosion where the electrochemical corrosion interaction is accelerated and concentrated by specific bacteria being active within a fire-sprinkler system. This results in the metallic system components failing prematurely.

MIC does not only exist in the fire protection industry. MIC and copper pipe corrosion are also problems in other mechanical systems in related fields, including gas pipelines and cooling towers. Those mechanical systems are however mostly dynamic and have relatively constant flow rates. Fire-protection systems don’t have these constant flow rates and there are also various differences when fire-protection systems are drained and refilled. The fire-protection community faces unique MIC challenges, while it also provides ever-evolving solutions to eliminate systems failing prematurely.

It is difficult to differentiate MIC from other types of corrosion. The nuclear, gas, and electric power industries have data that is well documented to support MIC failures, but the fire-protection industry has published fewer studies.

In 1996 the NFSA (National Fire Sprinkler Association) led a survey that requested information regarding experiences of sprinkler system failure via a questionnaire in its magazine for members. Forty responses were received from NFSA members in Canada and the U.S., and the NFSA concluded that MIC was widespread. It is however important to note that the qualifications of persons determining the type of corrosion are not known. This is particularly relevant as it is difficult to distinguish MIC from other types of corrosion.

A review of data from 1988 to 1997 was done by FM Global and this showed that corrosion was number 5 on the list of sprinkler system failure causes. The FM Metallurgical Laboratory conducted a study in which 155 cases of leaks in sprinkler system between 1994 and 2000 were evaluated. It was concluded that roughly 40% of these cases were caused by MIC. Commercial copper pipe repair is often one of the solutions that can be applied to fix the leaks and epoxy pipe lining can act as a barrier to permanently address corrosion caused by MIC.

Although MIC has been present in fire-protection systems for a long time, the corrosion’s source was only identified recently. The results are not conclusive, but it is thought that MIC is mainly caused by microorganisms with acid-producing bacteria or sulfate-reducing bacteria that are found in water sources. NFPA Standards specify that environmental conditions and water supplies should be evaluated to determine if conditions and microbes that contribute to MIC exist.

What is interesting is that MIC does not only occur in wet-pipe systems, but also in dry systems. Dry-pipe sprinkler systems contain nitrogen or air under pressure and when the heat of a fire causes a sprinkler head to open, the pressure release allows water to flow into the piping and out of the sprinklers. NFPA 25 specifies that dry-pipe systems have to be “trip tested” when the system is changed, or every three years. Dry-pipe valves must also be trip-tested annually. The trip tests enable comparative assessments to be done of the water delivery time, and this may reveal significant system operation delays. Although the tests are crucial to confirm the performance of the system, they could create the correct atmospheric moisture content where bacterial colonies can develop, and thus cause MIC. Currently, a common solution to alleviate the problem is to drain completely and charge with nitrogen gas or truly dried air. A more recent solution is to coat the interior of the sprinkler pipes with epoxy acting as a barrier coat between the harmful microbes and the sprinkler pipes.

MIC inside fire-sprinkler systems can cause metallic system components to fail prematurely. Although steel piping is normally the first point of failure that is observed, MIC can be found in control valves, sprinkler orifice caps, supply tanks, and fittings. Localized corrosion due to MIC can be in the form of crevices, pitting, filiform, and cratering.

Two types of premature failure commonly occur. The first is the system failing to hold water, which is caused by pinhole leaks from the accelerated, localized corrosion. This can cause significant system damage and may result in water damage.

The second type of failure prevents the system from operating as designed to achieve fire control due to biological growth. This growth is often a byproduct of microbial activity and can cause obstructions in the sprinkler system piping, as well as change the internal diameter of the pipe and the roughness of the pipe’s interior. These physical changes to the fire sprinkler pipes can impact the hydraulics of a sprinkler system significantly and may prevent water from getting to the hazardous area when there is a fire.

Without conducting assessments, MIC is very difficult to detect and MIC is typically first revealed by pinhole leaks in a system. Distinguishing MIC from other types of corrosion is tricky and even after an assessment has been done, MIC may still not be detected. If MIC is detected, services and test kits are available to analyze the extent and presence of MIC in the system.

NFPA 13 specifies that when conditions are found that contribute to MIC, the owner should notify the installer of the sprinkler system and develop a plan to treat the system with one of these methods:

Epoxy pipe lining is one of the approved methods that can be used to prevent MIC corrosion. NFPA 25 also specifies how water-based fire-protection systems should be inspected, tested, and maintained.

When MIC is detected in a fire-protection system, the system should be evaluated to establish the severity and extent of MIC. There is unfortunately no universal solution to fire sprinkler repair. In some cases, it may be possible to clean the portions affected to remove obstructions, while in other scenarios, parts of the system may have to be replaced. This can be done by fire sprinkler repair companies specializing in commercial pipe replacement. Epoxy pipe repair is another solution that is very effective at treating MIC by eliminating the contact between the microbes and the wall surface of the pipes.

Analyzing the frequency of alarm and drain testing may reduce the non-biological and biological corrosion types that could grow when fire-protection systems are drained and refilled.

To prevent MIC in fire-protection systems, it is crucial to be proactive by testing the water supply regularly and determining the bacteria types present so that adequate treatment can be applied. If MIC is found, using piping that is resistant to corrosion or creating a barrier coat, such as applying heat resistant epoxy, will greatly extend the system’s useful life.